Since leaving The Ledger in December, I have tried very hard to avoid criticizing my former employer. I have a lot of good friends still at the paper, and I don’t really see my place right now as a crusader against the hometown paper’s management or news judgment. 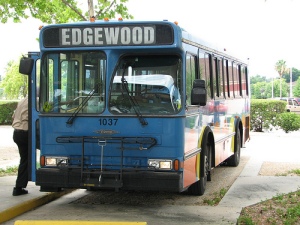 Everyone in the newsroom is working hard, and the last thing they need is Monday Morning Quarterbacks on every decision or article.

So with that out of the way, I had a major issue with one of the Gigs in this Sunday’s editorial in The Ledger. Here’s the part of the Gig that got me fired up:

GIG: To the Lakeland Mass Transit District — and to voters, who failed to support a mass transit referendum in November — for cutting in half the number of bus stops.

I don’t have a problem with criticizing the Transit District, though I’m not sure what you expect them to do with a $2.4 million shortfall. They had to make cuts, with a loss in federal money a major part of the problem. As The Ledger reported in its own stories during the process, the recent census data changed Polk County from a “small county” designation to a larger one. That change is taking away a large amount of operational funds, and there’s no new revenue source from which to draw.

But even so, it’s fair to criticize the cuts and argue that they could have been different or more creative.

The biggest issue I had with the Gig was the part that I emphasized in bold: Calling out Polk County voters. I have no idea how anyone who seriously followed the issue over the past year can lay the blame at the feet of Polk voters.

There are plenty of reasons the measure failed, including the fact that people aren’t going to vote to increase their taxes in a terrible economy. The timing for the measure to be on the ballot was terrible.

The only way anyone would vote for a new tax is if there were clear reasons given that it was worth it. When it came to the Polk County transit surtax, there was never a clear message to the public promoting its necessity. Not from citizen supporters, not from the business community, and especially not from elected officials.

There were pockets of support, but they were unorganized and unpersuasive. And if you think I’m the only one who doesn’t pin this on the voters but rather on a poor campaign and poor timing, read the following quotes or paragraphs printed in The Ledger just on May 25:

“We were late because there was no commitment for (transit) staff to move forward. It’s not staff’s fault, it’s elected officials’ fault.” – Lakeland Mayor Gow Fields.

“We don’t have the trust of the public on how we spend their money.” – Winter Haven Mayor Jeff Potter.

“County Commissioner Bob English said it’s important for local officials to be committed to having a transit system … It was the lack of commitment that contributed to the defeat of last year’s referendum, said County Commissioner Melony Bell.”

This quote printed on October 28 ahead of the election proved prophetic:

“The 800-pound gorilla in the room is it’s a tax measure, and trust in government is at an all-time low.” – Polk County Communications Director Cindy Rodriguez.

As I’ve written on here before, I’m not sold on mass transit being efficient in Florida because we don’t have the population density of other areas of the country. It’s the same reason I don’t support the SunRail project in Orlando, we are simply too sprawled to effectively make use of a countywide transit program.

Does that mean there is no value in having a transit system? Not necessarily. It needs to be a lean, efficient system, though.

Many people do rely on the buses, and I’m sure there are businesses that would support it. But I never heard from or about any of those businesses, and I never saw statistics showing how our economy would be hurt if we didn’t expand or at least maintain current services.

If there are clear numbers showing that kind of impact, then by all means supporters should have gotten organized and found a way to distribute information to citizens. Not everyone reads The Ledger, and the only place where I saw consistent support for the tax was in the paper, either in editorials or in quotes from elected officials. That’s not enough to convince people who don’t use a service to start paying taxes to support it.

As I hope you can tell, there are numerous and legitimate reasons that the measure was defeated. And if our elected officials aren’t blaming voters and instead blaming themselves, I don’t know how The Ledger feels justified in blaming voters for not supporting the tax.

Maybe in the future the editorial page will review content from the rest of the paper before rashly criticizing the public.

FYI – Parts of this post were also submitted as a Letter to the Editor to The Ledger. I’ll let you know if it gets printed.

This entry was posted in General, Government. Bookmark the permalink.