I’ve looked pretty hard, but I haven’t been able to find one article that really stands out from the past week to make my lead. 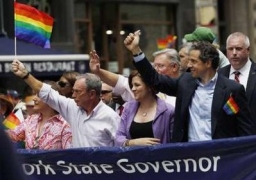 The biggest issue from the past week was, in my view, the legalization of same-sex marriage in New York. So, rather than giving a long intro with my thoughts – suffice it to say I disagree with the law – I’m just going to give some links to a few different responses to the issue. After that I link out to some other interesting stories.

So, here’s some to the New York same-sex marriage law:

I was hoping for some more heavyweights to weigh in on this specific vote, but I couldn’t find anything from the likes of Tim Keller, Mark Driscoll or even John Piper related to it. Hopefully they’ll give their perspectives on the topic soon.

This entry was posted in Faith. Bookmark the permalink.